Welcome to the second installment of our series on music theory basics, Ingredients of Music.

In the first post, we talked about why the study of music theory is important and how it can turn us into better musicians.

Today, we’re diving in to the first music theory lesson.

I know at first glance that might seem like a pretty boring topic. We all know what notes and rests are, don’t we?

Yes, we all do (I assume), but this series isn’t just about the whats of music, it’s about the whys.

And the whys behind notes and rests are actually pretty interesting.

Then keep reading and we’ll see what you think by the end of the post!

There are two basic types of durational symbols.

The first type of durational symbol is called a note. Notes are signs that tell the musician to play something.

Important Note: This post will use the American system of note-naming. See this post from MusicNotes for a side-by-side comparison of American and British note-naming terminology. 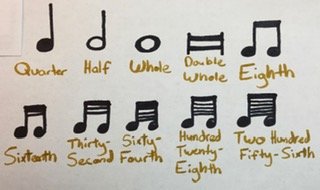 Any of these notes can be dotted; that is, a small dot can be added at the end of the note to add another one-half of the value to the note (for example, a dot turns a two-beat half note into three beats). 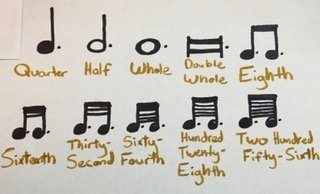 The following image shows those twelve pitches notated on both the treble and bass staves:

The second type of durational symbol is the rest. Rests tell the musicians when not to play. They are signs of quiet.

Like notes, rests are assigned a certain rhythmic value. 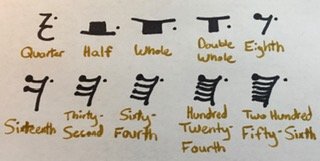 The why behind the existence of durational symbols is simple: without a written form of music notation, most of the best-loved music in Western history could not have been written!

Okay, so this one is pretty self-explanatory.

Without notes, there would be no music because musicians would never have anything to play.

So basic, and yet so important…just imagine a world without notes where no music is possible! No thanks!

Now, this is where the whys of music theory start begin to get interesting.

If you think about it, why do we even need rests?

They are not used in every piece of music.

In fact, a beginner might go through half of their first lesson book (or more!) before they even learn how to read them.

Why isn’t music just constant playing of notes? Why do we need the quiet signs in between?

The simplest answer is that rests can be used to breath life into the music. They are invaluable tools for musical phrasing and artistic expression.

Or, as Wolfgang Amadeus Mozart put it, “The music is not in the notes, but in the silence between.”

Think about The Hallelujah Chorus from Handel’s Messiah for a second.

At the very end of this masterpiece, right before the final “Hallelujah!” comes two full beats of silence, like a deep breath before one last joyful expression of praise.

The effect is breathtaking, and how does Handel accomplish this brilliant finale?

By using our second type of durational symbol: rests! 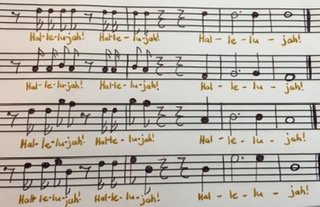 Just listen to the effect that Handel achieves here:

And that concludes the notes and rests portion of this series. What do you think? Did you learn anything new?

Now that we have a solid understanding of durational symbols, we’re moving on to rhythm and meter in the next post!

Other Posts in the Ingredients of Music Series:

Why Does Music Theory Matter?

Sign Up for the Email Newsletter and get a free copy of the “Fast Facts About Famous Composers” eBook!